My upcoming talks at Velocity and SREcon.

- June 06, 2017
Humbled, honored, grateful, and excited about the opportunity to speak at O'Reilly Velocity (@velocityconf) - London, in Oct (I am also speaking at USENIX @SREcon - Dublin, Ireland, in Aug). The idea that I am trying to spread through these talks is simple: aligning the incentives between the core development teams and the support functions which enable those teams to do their jobs effectively leads to better outcomes -- usually in the form of improved Velocity and Reliability. Why pick a talk specifically on Monitoring? Well, over-monitoring and alert fatigue is a real problem that plagues several industries; not just tech. As you know, telemetry monitors and their (constant) beeping is a pretty common sight in hospitals. In fact, I saw these at the NICU where my twins were being cared for after being born prematurely. My wife and I used to freak out every time one of these went off. Unlike a missed alarm that said your site's down, failing to act on an alarm at a hospital can have much more critical consequences; in 2010 at a hospital in Massachusetts, a patient's death was directly linked to telemetry monitoring after alarms signaling a critical event went unnoticed by 10 nurses. Hope to see you there :) I'll try to make it fun!

Popular posts from this blog 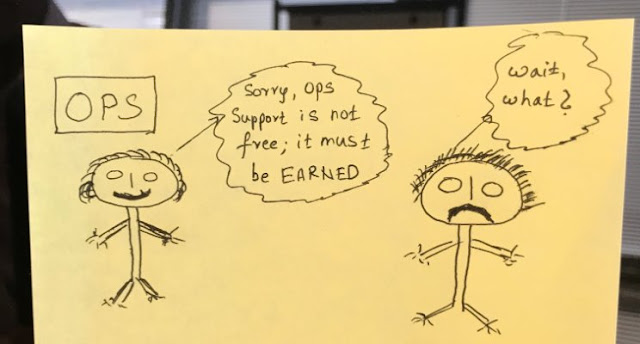 Note   — I have been giving talks around the world on this topic (SREcon, Velocity, etc). Figured, I can reach more people through an article. Any/all feedback is highly appreciated! "Research has shown that 72%–99% of ECG monitor alarms are false or clinically insignificant." Quite a staggering number and quite scary given that lives are at stake. If you have ever been to an ICU, you cannot help but notice the telemetry monitors and their constant beeping (they are such a common sight). In fact, I had the first-hand experience with these monitors in the NICU where my twin boys were being cared for after being born prematurely. I still remember vividly how my wife and I used to freak out every time one of these started to go off. Being an ops guy, I could not help but relate this to being paged while on call. Because I was curious, I did a bit of a research on this topic and found that some Ph.D. students had actually published a paper on this topic in 2013. It
Read more

Great artwork of my DevOpsDays NYC talk last month, explaining DevOps patterns and anti-patterns; and some great feedback (from some well-respected folks):   "The topic from @KishoreJalleda is one of the best I’ve heard brought up in a long time. We need to progress closer to the customer and it’s a topic I’ve been fascinated by for a while now." "Availability is everyone’s job, not just ops!💯 @KishoreJalleda"  "YES! Uptime 9s don’t matter if users are unhappy! Hearing how much uptime is good enough makes me happy"  "Your customers don't care how many times a day you ship code, @KishoreJalleda on focusing on end users, not engineering velocity"  "It’s really important to know true empathy, live like your customers; embrace their experiences"  "Ops Engineering isn’t dead or going anywhere, but it’s time to take responsibility for our destiny."  "DevOps is table stakes. Everyone is moving toward that. The r
Read more

Difference between Junior and Senior Engineers/Managers/Leaders

- November 24, 2017
Qualities of junior engineers/managers/leaders or just about anyone in general:  1. Struggle with brevity; struggle with coming to the point.  2. Use hyperbole to get their point across.  3. Complain about not being invited to that important meeting. 4. Jump to broadcasting a problem w/o thinking through consequences-- just to be the first one.  5. Worry more about looking smart. 6. Only state problems. 7. Love status quo or don't know how to get out.  8. Have a myopic view. Don't understand the root cause; don't ensure production defects remain fixed.   How to become senior?   1. Come straight to the point; provide details later (or, if asked).  2. Avoid hyperbole like "single-handed", "must read" (may be OK in some cultures). 3. Ask that you are invited. Simple. Don't complain; act. Be a leader.   4. Think through the problem; craft your message, and only then deliver.  5. Worry less about looking smart; put more energy into learn
Read more